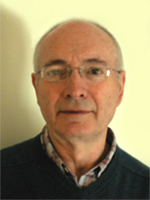 Hi, I'm David Axton. I was born in London and had an exciting business career, rising to the giddy heights of teaboy at a merchant bank until it was taken over by a French company which only drank wine, so in 1998 I took early retirement.

Having dabbled with the written word in my youth (mainly copying naughty stories and selling them to schoolmates at sixpence a time) I decided to try my hand again - after all I couldn't play golf every day. In 2000 I started this website and over the next 38 months added over 100 titles but then discovered the 'quantity to quality ratio' and took some off again. I also had an "Issues in Verse" section on a local community website but forgot my password.

Well-known for my unwitting Victor Meldrew impressions I now live on the North Norfolk coast with my computer, a set of lawn bowls, a tide timetable and some amazing friends.

My work has been used in schools in America and Canada and at international education workshops, a three-night program performed by the Dallas Symphony Orchestra, the Bristol Arts Festival and many small UK events.
It is also recommended reading in the practitioner's guide for improved reading by the National Research & Development Centre for adult literacy & numeracy, London

Unfortunately "David Axton" is one of the pseudonyms used by Dean Koontz, a popular American writer, and this has led to some of my work being attributed to him (if, of course, that's his real name).

The Pseudonym
It's not much fun being a pseudonym,
People don't really know who I am:
They think I'm Dean Koontz in disguise
So I'm dismissed as being a sham,
And at least one other writer
Has hidden behind my name
So if you think their writing's rubbish
Guess who takes the blame.
Well, I've got a birth certificate
Which says I'm really me
And that I always have been
Since I was born you see,
So when you pass me in the street
You can say, "Oh look, it's him -
"It's the guy I've seen on Google,
David Axton the pseudonym".